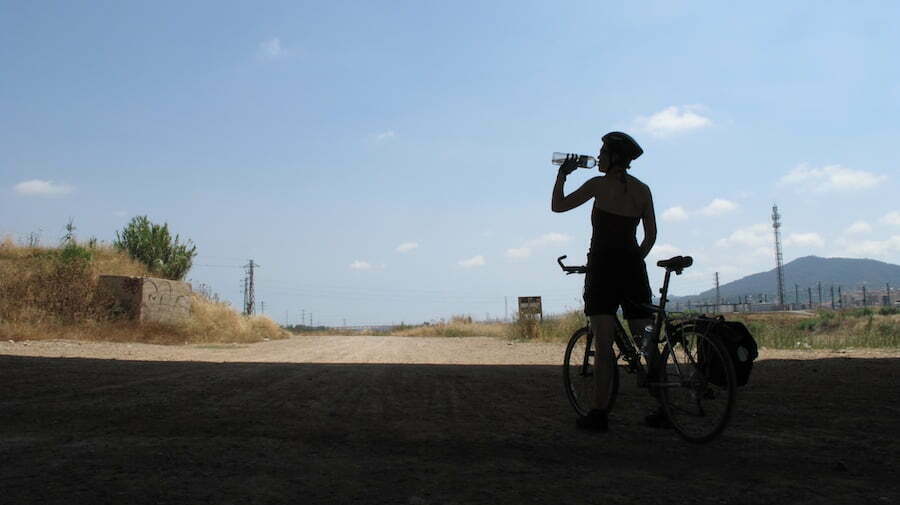 After a sleep in and a lazy lunch we saddled up for the final leg of our journey, into the centre of Barcelona.

It was suitably hot as we rode across the footbridge over the river to pick up the cycle track Gina had told us about. However the cycle track was more a concept than work in progress and it was a good job we were on mountain bikes as the track was dusty and heavily rutted in places.

The route took us about 15kms south east following course of the river, along the same course as several major roads and a railway. The land either side of was a mix of motorway fringe, reed beds and allotments. Several times we passed under huge road junctions, the sort of places you see small communities camped under, but aside from a few workmen digging up the river we saw no-one. It was at times quite surreal.

After about an hour the track turned into a proper cycle way and we felt reassured we were on the right route. However as soon as it began, it stopped! We could see it continue 50m further on but a large fence barred progress. Odd and frustrating we had no choice but to turn around and rejoin the ‘main’ track.

Things speeded up when the track turned into a metalled surface. As we got further in towards the centre the allotments became more established. Fruit and olive trees alongside enviable tomatoes and large crops of artichokes. They looked very different from the allotments we know in Scotland, but there was clearly the same love of the land (and sheds).

Eventually we came to a small bridge which would take us over the motorway to a place we could start heading to the centre. After negotiating some fences we were on a proper road again and set a course for the heart of the city.

Through l’Hospitalet and across many blocks the city changed. Factories became warehouses, pavements appeared, and when there were palm trees in the central reservation we knew we were getting there.

Then, almost without warning, we rolled into the Plaça d’Espanya, with it’s huge towers guarding the entrance to Montjuc – we were here, the centre of Barcelona, we had made it! We posed for some photos before rolling on to some of the other quintessential spots such as Las Ramblas and Port Vell. Here we had an ice cream and watched the world go by, both slightly lost in our thoughts, it feeling odd that we were marking the end of such a momentous trip yet to others we were just another couple of tourists on bikes (note to self, get t-shirts printed next time).

From the harbour we went back up Las Ramblas to the Plaça de Catalunya to meet up with Gina. This felt like the heart of the city and a fitting place to call journey’s end. A couple more photos and a final ‘bat signal’ (our name for sending our GPS location to the map) and we headed for a beer with Gina, then to the station to head back to the flat on the train, where Neil, food and wine awaited – we saw no reason and had no urge to bike back!

So, it’s done. The plan worked, the goal achieved. It’s been fabulous, difficult, exciting, rewarding, tiring, and numerous other things. I know we’ve both changed for the experience, but at the moment I’m not sure how (aside from being thinner and browner), I guess this will emerge once we return home.

I’ve enjoyed doing the daily updates, but glad this will be the last. Trying to describe our experiences with words rather than pictures has been a challenge. It will be interesting reading over when we get home.

A huge thank you to everyone who has supported us on this (ad)venture, the donations and comments have been a constant motivator without which we may well have been tempted to accept offered lifts or sneak through the mountains on a train (it was discussed). Thanks also to those who have provided such excellent hospitality along the way. Janie in Larnagol, Pete and Dee in Pouech and Gina and Neil in Barcelona. Beds, pillows, washing facilities and numerous slap up meals are all much appreciated. Special mention also to those back in Edinburgh whose help made it possible for us to head off, James for looking after the cats, Kevin for the server (and for use of maps and panniers) plus Steve and Michele for keeping an eye on the allotment. Thanks to all, without you we’d have never have been able to have one of the great experiences of our lifetime.

Final mention goes to Helen, whose enthusiasm, strength and love made the shared road a better place every day. I’m looking forward to the next one already…