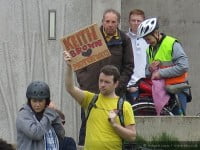 The third Pedal on Parliament ran last week, another cry for a better deal for cyclists on Scotland’s roads. This year the Scottish Transport Minister Keith Brown decided to come along (not before time), but his arrival was not universally popular.

Allebong posted a great timelapse of cyclists arriving at Parliament on Flickr.