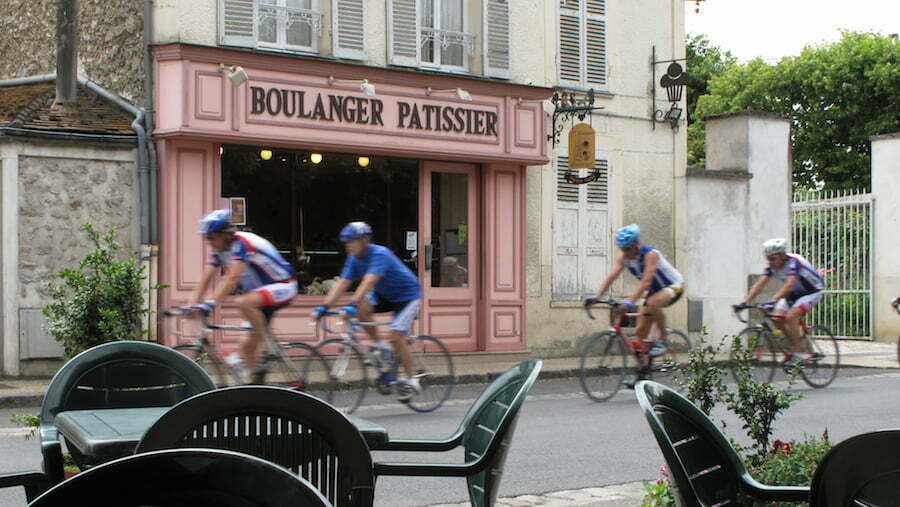 The first full day of cycling was long but very satisfying. Some bike maintenance first thing saw us set off about 9am, just to stop 5 mins later for breakfast. Then the mission was to it was to get out of Paris, not as easy as one would think, made harder by roadworks and half built cycle ways through industrial estates. But slowly (and with a lot of reference to google maps) the character of the roads changed, buildings were replaced by trees and the traffic thinned out and by mid day we saw our first Chsteau – surely a sign we had made it which we celebrated by eating the baguette we had strapped the pannier rack (French style).

From there our route took us through the Foret de Senart to meet up with the Seine which we followed on small roads lined with grand houses and then into open country. We felt we had truly left Paris behind as we passed fields of thousands of tiny lettuces, enjoying the soaking form the water sprays.

Babizon is a small village on the edge of the Foret de Fontainebleu, it reeked of expensive luxury. Classic car showrooms and art galleries lined the streets along with boutique hotels and stylish restaurants. We didn’t linger! Instead we plunged into the forest and quickly found lots of strange rock formations, some like mushrooms, others like waves. These were the boulders of Fontainebleau I’d read about in climbing magazines as a teenager and now we were here. After a few minutes clambering around I remembered I’m not a very good climber so we pressed on, up and over then down into Fontainebleau itself.

Apparently it’s not a palace, rather just a chateau! It looked like a palace to my untrained eye. Even an expensive beer didn’t convince me. A sketch 30 min search for a supermarket resolved itself (thankfully) as we had another 10kms to go to the campsite we had spotted. Except when we got there it looked shut! Disaster, the next was another 20kms. While we tried to work out what next we heard voices, so asked – result, it was open, we has just arrived at the side entrance. 5 mins later we were pitching the tent by a lovely lake and all was right in the world. Food, wine, shower, bed. This looks like it may be the pattern for the days ahead.