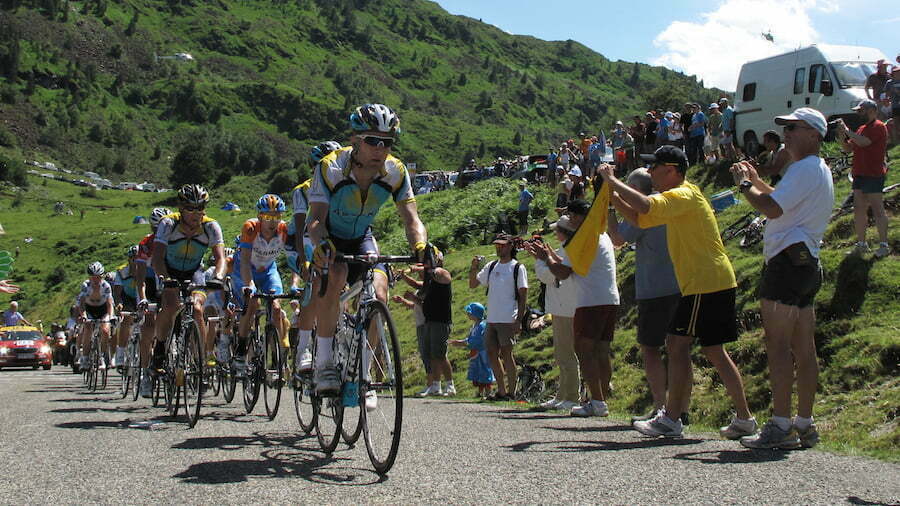 Ping! Awake well before the alarm with one thought, today we’ll see the Tour. It was easy packing up as everything was ready to go, but it was hard saying goodbye to Pete and Dee. They had made us feel so welcome and there we’re so many other good things to do in the area that it was going to be hard back on the road, but we’d come to see the Tour so leave we must.

The run into St Girons was excellent, a tail wind saw us averaging about 35kms/hr – progress like this and we thought it would be a breeze! We stopped for a baguette and a spare inner tube having split the valve on my rear tube with some over vigorous pumping the night before.

We had hoped to see the finish area in the town but the flow of traffic was such that we found ourselves diverted off our planned route so we just headed towards Massat. The first part of our route took us along what would be the last 15km of today’s Tour, a lovely steep sided tree lined gorge. Already (this was 9.30am) people were lining the route, families, couples, individuals, everyone wanted to bag their spot early and make a day of it. This made us concerned that if it’s like this in the valley what will it be like on the tops?

Up to Soueix the flow of traffic going passed us was fairly continuous, but when we turned off the Tour route to head for Massat we once again had the roads to ourselves. Again we made good time and arrived in Massat at 10.45am just as they were setting up the barriers as this would be where the Tour started it’s third and final climb of the day. There were people on bikes everywhere, the cafe’s were packed and long queues in the shops. Fortunately we were stocked up (though a coffee would have been nice) and were able to head up the road without delay.

The streets that the Tour would ride on were immaculate, swept clean and dressed with flags and flowers, all ready for their few moments of fame. There was a definite collective excitement as we rode out of town and passed the sign for the Col d’Agnes. And so it began. 12kms of up, deceptively the first few were quite gentle, this could only mean the latter ones were going to be anything but!

We had plenty of company on the road, cyclists of every age (but mostly French and Spanish), all on road bikes – certainly very few mountain bikes and absolutely none with panniers and tent! We felt we were doing things differently, while keeping at bay the thought that we might be insane. Actually our approach caused quite a stir and we were often clapped or given an ‘allez’ as we went by. All helped as it was getting steeper and hotter.

By this time many of the groups on the side of the road were settling down for lunch, picnic tables ladened with bread, cheese and wine. After photographing one party I was invited to join them, it was tempting, but I declined and pressed on.

As we emerged from the trees there was no shade and it was suddenly even hotter, though by now we were onto the hairpins which tended to lessen the angle of the road. The higher we got the greater the crowds, camper vans and cars lined the roads, some parties clearly having been there for days. Singing, trumpets, cow bells, it was full festival mode and the Tour was still hours away. When we arrived at the Etang de Lers there seemed to be a small village of shops set up with people, bikes and officials all milling around and this wasn’t even the top – that was another 4kms and 300m of climbing away. Since we would be heading the other direction the next day over the equially high Col de Lers we felt justified in stopping here, especially as the view was down the valley and of a number of zig-zags meaning we would see more of the Tour.

We settled in for lunch, bread, cheese and beer (worth lugging it up) and to wait. The scene was incredible, thousands of people with more arriving on bikes all the time. Official cars started whizzing by, though these were only early support, but then the first of the Cavelcade came round the corner, a giant yellow cyclist moulded onto a van! Accompanied by blarring horns and a stream of othe vehicles it had begun.

For the next hour a succession of odd contraptions file by, from dinosaurs to huge newspapers each float was a sponsors PR machine with free gifts being hurled (sometimes quite hard) from the back. It turned the crowds, including us, into a bizarre feeding frenzy all clamouring for some free shit. We ended up with a pokka-dot t-shirt, a number of caps and a bag of sweets. I missed out on the bottle opener which bounced off my head, I was too dazed and someone else snatched it off the floor. Dark looks were exchanged but soon forgotten when the next van came along.

Once the Caravane had finished we had about an hour to wait for the Tour proper to arrive, just enough time to sup the ,ow very warm wine we had bought up with us. Helen dressed up in all the freebies she had got and we waited for the sounds of the first helicopter, the sign that they we’re approaching. We heard the first at about 15.40, pretty soon the air was full of them, we counted 7 in total. They were accompanied swarm of motor bikes bristling with photographers. It was satisfying to see the man from Getty stopped at our spot to get some shots, a sign we had chosen well.

Then, what’s that? The red race car in the distance followed by 4 tiny figures – the leading group came into view and the mountain side erupted in cheers and whistles. A few seconds later the chasing group emerged from the trees generating an even louder response. Up they came, making our efforts earlier look pedestrian (which they were, but would like to see them with panniers).

When they reached the party of Dutch supporters on the curve below us the sound was incredible. Cow bells, trumpets and god knows what else, it doesn’t fully come across on the TV what a fantastic racket it is. Moments later they were streaming by, people jumping up and down, cheering and trying to take photos. I’ve no idea how they ride through it, but they do, barely registering what’s going on around them but I guess with half an eye out for the real nutters. And then the second group was upon us, Armstrong, Leipheimer, Evans, Sastre, all the big names sweating past in a blur of lycra, muscle and very expensive bikes. Allez, allez, ALLEZ! We all shouted ourselves hoarse. Fantastic.

But wait, there’s more, stragglers to cheer and encourage, the effort of staying in touch with the leaders clear for all to see. Nowhere to hide as they grid up the hill. As the last of them rounds the corner a kind of calm descends, the crowd sated but not quite ready to disperse. They all know there’s the main field to come, sticking together in an attempt to get up the mountain without falling below the cut off time. And here they are, a clear 10 minutes behind the leaders. Amongst them are the sprinters, Cavendish in green, but not for much longer, they all get the same treatment, frenzied cheering and a collective will for them top pedal faster. Finally, a further 5 minutes behind is a lone rider with his own police escort, the Col d’Agnes proving to be his undoing. It’s impossible to know his story, was it a crash, a puncture or has he hit the wall. Whatever it was he too was cheered as if he were the leader. A faint smile might have crossed his face, or it might have been him gritting his teeth harder.
Either way when he ronded the corner above us that was it, our moments with the Tour were over.

But not quite, behind us was a British camper van with a small crowd gathered around the open door, they had picked up the ITV4 coverage of the finish so we joined the eager throng. Many left disappointed the commentary was in English, but we were delighted, more so when Pete and Jane put the kettle on and handed round mugs of tea. So despite being high on the mountain we saw the finish in Saint Girons.

We waited for the worst of the traffic to clear before heading up to the bar for a ‘demi’. It was such a lovely evening we decided to camp high so pitched our tent, cooked up supper and then wandered back round for a drink with the camper van crew. We were joined by 2 other british cyclists, over to ride some of the cols (including Mont Ventoux) on a whistle stop tour. We supped their wine till it got dark, then headed back to the tent, guided by the gentle light of glow worms in the bracken. A magic end to a truly spectacular day.