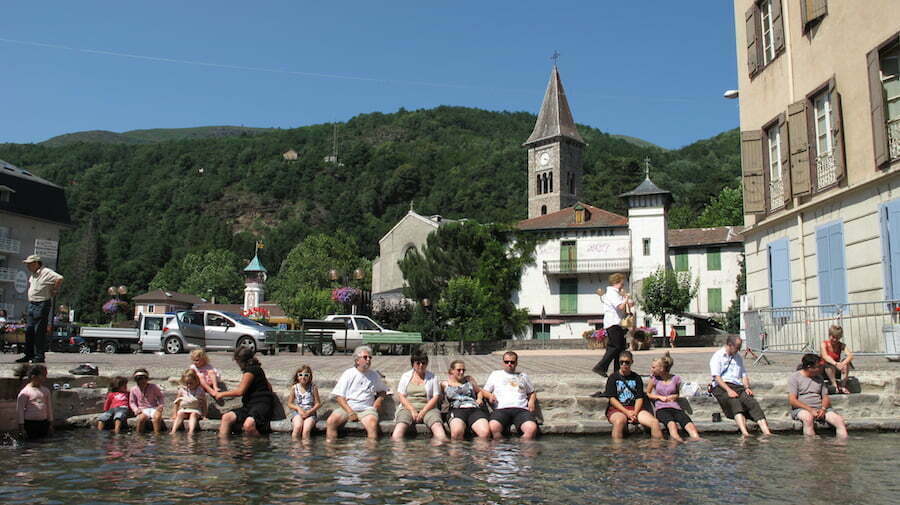 We were packed up and on our way by 9am, pausing only to take a picture of the growing pile of rubbish the camper van drivers were piling at the side of the road. I was berated by a Frenchman for taking this photo, I’m not quite sure why, but he looked even less impressed when I pointed out that we were taking our rubbish with us. Dumping litter in remote spots makes my blood boil. We see it at home and I should have realised it’s not exclusive to Scotland, but really, there’s no need for it anywhere.

With 216m of the climb left (max gradient 8.2%) all this was quickly left behind, instead we enjoyed the opening vista and revelled in the scene. Before long we were on top of the Col de Lers, at 1516m our highest point so far.

The descent was very exciting. I touched 65km/h at one point as we lost 800m over 11.5kms, along the way we saw lots of old grafitti on the road from previous Tours, this combined with the fact that much of our route for the rest of the day followed yesterdays route makes the Tour seem very close, despite it pedalling away from us. We stopped at Vicdessos for coffee and to resupply at the 8-till-late shop. From there we made good time down to Tarascon sur Ariége, passing signs to more caves which we hope to explore on our next visit.

Now came the unavoidable main road, for the shortest route into Spain was via Ax les Thermes and the road to Andorra. It being Sunday meant there were no lorries on the road but it was still busy. Add in the heat and problems with Helen’s gears slipping then neither of us enjoyed the run into Ax very much.

Having tinkered enough to keep the gears turning and a quick pit stop at a bakery we rolled into the centre of Ax in slightly better spirit. Things improved again after dipping our feet in the public spa bath for 10 minutes, the water almost scalding hot and refreshing like a cup of tea on a hot day.

Suitably refreshed we headed up the road towards the Col de Puymorens, at 1920m an ambitious target for late in the day, but we thought we’d see how far we’d get.

Busy, hot and overwhelming, this was a long way from the quiet roads we were used to, but the alternatives were very long detours so we pressed on. A Cornetto at Mérens helped as did the fact that the angles were not too punishing. When we arrived at L’Hospitalet at about 7pm we debated carrying on for the summit. I asked in the campsite and they confirmed there was another at the top, but the lure of showers and food proved to much and we decided to finish the climb in the morning. The advantage if this was I was able to fix Helen’s gears properly, which should make tomorrow’s riding more efficient. Early start tomorrow, Spain beckons.