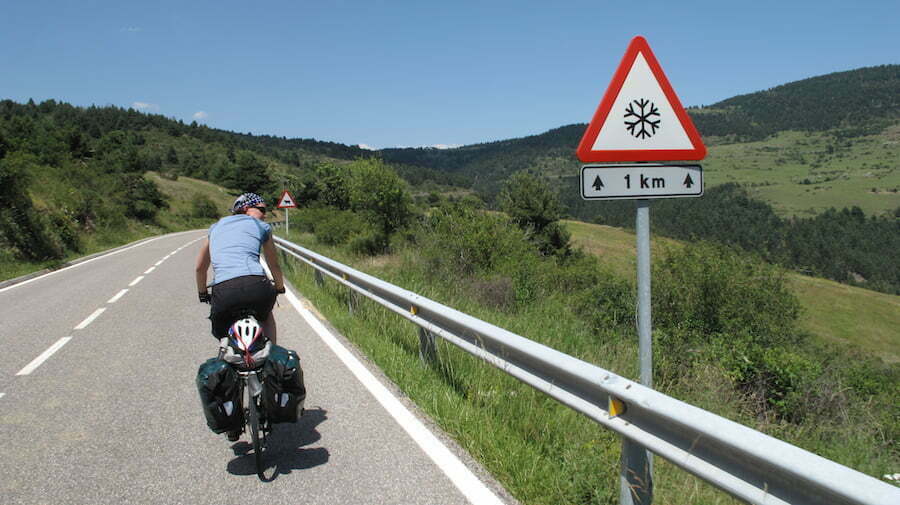 A sleepless night spent listening to the wind and trying to ignore the mosquito bites on my back (40 of the buggers, they got me through my cycling top while putting up the tent) did not set up the day well. Having decided to stay at L’Hospitolet we still had over 500m of ascent to the Col de Puymorens and a head wind would not make it any easier.

We were packed and away by 7.45, but stopped as soon as we started for coffee and croissants figuring it would be the only place for a while. Suitably refreshed we started up the road, busy with Monday morning traffic, but thankfully not many lorries. Zig after zag followed, we gained height quickly and before long we saw the rising sun glinting off the border post between France and Andorra. But that was not our route, instead we turned off towards the col, thankfully leaving almost all of the traffic behind. We had the last stretch of the road to the col almost to ourselves and it was two sweaty but happy cyclists who posed for photos by the sign marking the highest point of our tour, 1920m.

Looking over the other side we could see the road snaking down into the valley. It looked a lot of fun and it was. We missed the turning for the village at the bottom so had to forego our second (or third) breakfast, instead we pushed on, relishing the easy kms. We arrived in Bour-Madame on the French/Spanish border just before lunch, stopping at the supermarket to get a map and provisions for lunch. We looked around for somewhere nice to eat them but nowhere appealed, so we pressed on across the border (a sign on a bridge), bypassing Puigcerdà in search of shade and a view.

We found some in the lea of a house on the edge of Urtx. Not ideal but we were both hungry and ahead of us lay another climb. Studying the map we realised we would have to detour east, away from the natural route south because of another long tunnel (no cycles). This meant climbing back up to 1800m, and it was hot, really hot, the hottest ‘on the road’ temperature so far according to Helen’s bike computed, 44.3 deg C!

The good news was it was a very gentle ascent, 600m over about 20kms. This didn’t especially make it easier as it just seemed to drag it out. It took about 2hrs slowly winding up the mountain with ski villages dotted around reminding us that we were in the high Pyrenees.

A giant hotel greeted us at the La Collada de Toses, out of place in the scenic grandeur. Fine if you like that sort of thing, but we don’t, so we prepared for the descent. And what a descent it was, about 25kms down to the village of Ribes de Freser. Fast, sweeping roads with stunning views down the valley and little traffic to worry about. Suddenly the pain of the ascent was forgotten while we relished flying down the mountain – a feeling not dissimilar to skiing on empty pistes.

Big grins on our faces we saw a bar as we rolled through the village and couldn’t resist a beer. This saw us on for the next 15kms (still all downhill) to Campdevànol where we had spotted a suitable campsite.

Shower, food, wine, the usual pattern for what will probably be our last night on the road. With the Pyrenees behind us and just 120kms to Barca we hope one last push will get us there.