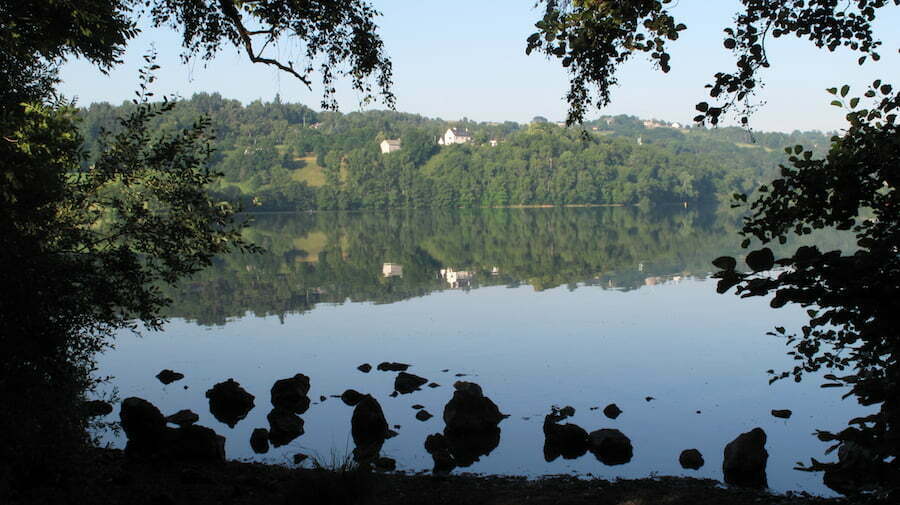 It was a day of ups, downs and gorges! The first up was as soon as we started, up and out of Aynat and onto the volcanic plateau that extends like a skirt around Puy de Dome. Like every other day I’d forgotten to warm up properly so after 10 minutes my hamstrings were tightening up and I had to stop in the shade of a driveway to do some stretches. I just hoped the folk who lived there hadn’t chosen that moment to look outside! The good news is that these simple exercises help a lot and soon we were on our way again

The road to traversed the plateau at around 1000m. With the higher peaks and passes of Mont Dore to our right we were almost tempted to make for the tops, but needing supplies we headed for Murol. Our decision was rewarded with a spectacular sweeping descent with views to distant volcanic peaks with the remarkable Chateau de Murol in the foreground. Plus to my delight we had stumbled on the ‘Route des Fromages d’Auverge’ and were able to buy some excellent local cheese in Murol, the location of our now mandatory second breakfast.

Leaving Murol was a long hot slog, but like all the rest it relented in the end, then it was time for lunch. Can you see the pattern? Climb, eat, repeat! We sheltered under the trees by Lac Pauvin south of the ski resort Super Besse as it looked like the clouds which had been developing all morning would deliver the forecast storms. But no, they held off and by the time we set off again it was already clearing.

The descent from our high point (about 1350m) was fabulous, about an hour of down hill – not so steep that brakes were needed, rather and steady and flowing where all you needed to do was sit up and your wind resistance would slow you down. This quickly added to the day’s distance travelled which up till then had been restricted due to all the climbs.

The road continued down through lush tree lined (gorgeous) gorges, the air getting noticeably warmer and more humid as we lost height till we reached a town called Condat. The temptation is often to press on, put more miles in, but this risks missing the hidden gems or in this case the hidden fossils. The dayglow sign for the ‘Musee Servaire’ suggested it wasn’t your usual stuffy museum, indeed in this was the finest collection of fossils I’ve ever seen and M. Sevaire was eager to show us around his life’s work. Form the 230kg meteorite from Argentina (about the same size as one of our panniers) through to the amazing uncurled amenonites (they don’t know why) this was a richly varied exhibition and the owner was on hand to tell stories about all the exhibits. I was amazed to find such a treasure tucked away like this and can only hope the season (they opened yesterday) goes well for them. See: http://www.museeservaire.fr/

From there it was another long hot climb out of the gorge, this time accompanied by swarms of flies, which was nice! This last climb lead us to Riom es Montagnes whose municipal (ie. cheap) campsite and promise of pizza lured us in to call it a day. Although off the ‘target’ distance 80kms over the terrain we had covered was a significant effort, making the subsequent pizza and all the trimmings taste even better.

Early night as a big day planned for tomorrow, an attempt to make it to Janie’s place to the SE of Figeac. Our legs, the weather and the roads all need to come good if we are to make it in one push.