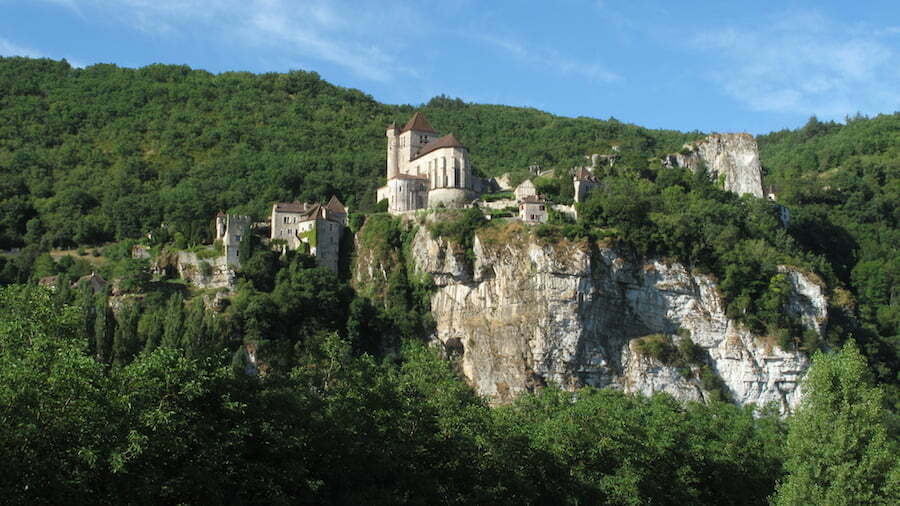 Having one again consumed a nudge too much wine at the fete it was time to get going and work it all off. We left Larnagol at 8.30 and headed to Pech Merle, famous caves with pre-historic paintings about 25kms away. Janie had booked us in on the 11am tour so we had good time to get down there, thought the pull up to the caves caught us out and we were overheated by the time we arrived.

Tour groups are limited to 25 and there is a cap on the number of groups per day in an attempt to minimise pollution in the caves. We were glad we had booked as the French holidays had started and there seemed no places left.

The introductory talk went mostly over our heads, but the gist was the caves were discovered 60 years ago and they contain some if the best preserved pre-historic (circa 25,000 years ago) cave paintings in the world. There was a palpable excitement as we we’re led through the heavy doors protecting the modern entrance and then down…

The caves themselves are impressive enough, passages, chambers and all manner of limestone formations (all tastefully lit) look stunning, however all pale into the background when you see the first painting of a mammoth. It’s so almost impossible to comprehend the timescales, motivations or the individuals involved, but here are echoes across history on the wall in front of you. Not only that but the images themselves are surprisingly beautiful, simple lines depicting what was either their quarry or their gods. The tour lasted an hour, but the images and connection with these ancient people will stay with me for a long time.

We rolled back down the hill, had a coffee/chocolate chaud and planned our route, up and over the Causse de Limogne (limestone plateau). Before we set off I had to have a work related phone conference to discuss the finer points of data capture mechanisms on a project I’ve been involved with for the last 3 months. It was quite a bizarre experience as location and time away from the project made it hard for me to get into the head space. However it seemed to go well and by the time we had climbed the 300 meters our of the valley I had totally forgotten about it.

The plateau seemed remote, forgotten and slightly odd. One of those places where scarecrows take on a sinister look and the houses look half finished. We barely saw anyone and it was only as we descended out of the forest that normality returned. We were relying on some shops to be open in the large town of Caussade as we had no provisions except for some honey and a can of sardines (though there are folk who would call this dinner and dessert). It didn’t disappoint, a mini Cassino coming to the rescue again.

Helen suggested we press on another 10km to Negrepelisse on the banks of the Aveyron. Once again Google maps on the Blackberry saved a lot of faffing and we we’re able to find the campsite, pitch, shower, eat and write up the day.

Tomorrow we aim to make it to the other side of Toulouse. Not quite decided if it will be through or around.