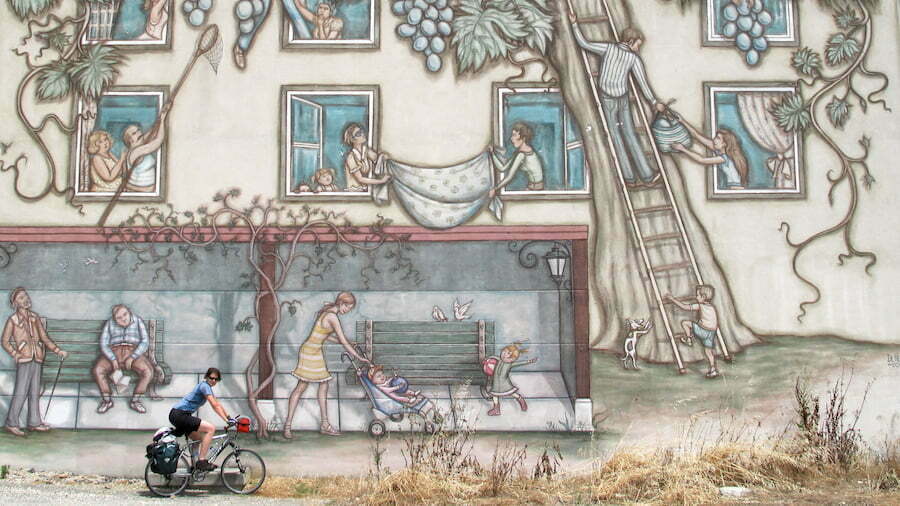 Helen was giving it the big Z’s this morning so I caught up on a few emails while she slept. It had rained during the night (the first time since day 3) and it was still cool and overcast when we packed up and set off. I was secretly relieved that the weather had cooled off as the heat on the plains around Toulouse can be ferocious (but a couple of deg warmer wouldn’t have gone amiss though).

We decided to take the direct road into Montauban to save time, but a head wind slowed us and made it hard work. My legs felt sluggish and I was starting to worry about the Pyrenese, all negative thoughts which needed to be banished. Arriving in Montauban we found the tourist office to check on cycle routes to Toulouse, then second breakfast helped restore energies.

Heading south took us through the vinyards of Fronton, always keen to eat and drink locally I fond a bottle in the supermarche this evening – very good it is too (supping it as I write).

From there we descended to the plains where we picked up the Canal Lateral à la Garonne. As part of the long distance route from Bordeaux this took us right into the hear of Toulouse, missing out all of the traffic and route finding hassles. Along the way on the canal we passed the 1000km mark since we started 2, a tally we celebrated with baguette and pate.

As we drew closer to the city so more graffiti appeared until it seemingly covered every available inch of warehouse (though interestingly not private property). Some was your usual ‘tagging’ while others we real works of art. When it’s this good it deserves to be displayed with pride as I think it can enhance what are otherwise drab light industrial estates.

We stopped for a ‘demi-pression’ on the river and contemplated our next move. The map showed the nearest campsite to be too far to be useful, but the tourist office came up with a list of others. The detour had revealed Toulouse to be an interesting and varied city, one we’d be keen to come back and explore, but with the bikes and the need to get ourselves sorted it would have to be another time.

Heading out of the city (like Paris) was a nightmare. Our timings were wrong and we caught home time traffic, the quiet D road we were on turned out to be the escape route for countless commuter villages along the way. The sudden exposure to traffic had the effect of making us both angry, not at each other, but at the traffic. Everyone seemed hurried and impatient, with no consideration for the fragile cyclist, but it was probably just us not being used to busy roads.

It was with a sense if relief that we reached Lacroix-Flagarde (great name), a collection of small shops in which to stock up on wine and veg allowed us to relax and concentrate on finding the campsite. We did eventually (thanks again to Google maps) and were able to wash, eat and relax after another 100km day , well it was actually 99.78km, but we think that’s close enough!